The Seattle Sounders faced two very important matches this week, meeting up with the Colorado Rapids at Century Link field and Chivas USA at the Starfire training grounds and coming away both times with a much needed win.  The league game on Saturday was particularly special, ending our winless nine game streak and seeing the return of Sounders hero, injured player Steve Zakuani, who’d had his leg broken facing the Rapids a year and a half ago.  Our Sounder-supporting gay4soccer contributors, Grant (@ducki98444) and Tom (@thepickupbear) sat down and talked about that match afterwards. 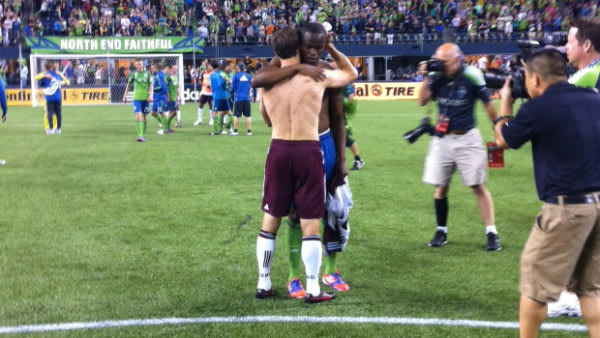 What were you feeling before the game?

(Grant) I was nervous. I mean it’s been 9 matches with no wins. Steve was in the 18. I really didn’t want to lose to the Rapids at home. Our defense has had lots of lapses recently. But I had a lot of optimism about what we could do.

(Tom) I was excited before this one.  I knew the rumors about Zak’s return, but figured Colorado was a risky time for the Sounders to sub him in…I was glued to my twitter feed before the game anyway to get a hint of the 18.

Did the history between the teams color your expectations of the game at all?

(Grant) Well of course. With any team you’ve played before there are perceptions, expectations, and history. This matchup has become one with lots of emotions due to the idea of thug-ish physical play from the players. My mother would say that there’s a hair of bad blood there, I would say it’s a leg full of bad blood.

Where were you when Steve Zakuani broke his leg?

(Grant) I was in an Irish pub in a small viewing room, only about 20 people squeezed in.  When it happened I had to look away.  I could hear it!  Everyone got super quiet.  My boyfriend had to leave the room and go outside.  Let’s just say that we haven’t sat in there to watch a match since.

(Tom) That was actually before I was a Supporter and didn’t follow the league as closely then – I was aware of it, but hadn’t witnessed it.  It was the Rapids game earlier this season that made me go back and watch – the video of the injury is just gut-wrenching.

Who were your top performers during the match?  Best moments of the night?

(Tom) I really enjoyed seeing Maruo zip all over the field, he looked in top form.  I wish I could be sure he had full confidence all the team though, he seemed like he was second guessing some of the players, Andy Rose especially.  I loved seeing Alvaro (“Flaco”) Fernandez’s play and especially his goal.  You and I spoke about this at half time before he scored – I knew he had to be hungry for a goal with the transfer window looming.

What was it like for you when Zakuani was subbed in?

(Tom) You could feel it coming – see the shuffling on the side, the clock counting up towards 90 – you definitely knew it was coming – and it came right when Colorado scored.  It made my heart stop for a second thinking we wouldn’t see him come in – but he came in anyway and we just screamed.  I held my friend and we just yelled our hearts out in support of him.

(Grant) There was so much emotion for me.  I had full grown men and women jumping up and down screaming like a 11 year old girls. There is nothing like it I have ever experienced before.

(Tom) I loved seeing his amazing bursts of speed, and was thrilled that he helped keep the score as it was until the end

What was your reaction after the match?

(Grant) I was riding a high for hours. It took a friend to tell me that we won that match, I was so emotional about Zak coming in that I didn’t realize that the goal was called offside. I didn’t care!  The fact that we won was icing on the cake.

(Tom)  I’ve felt like I’ve seen some pretty big games this year, but this was definitely a huge moment – felt like something out of a World Cup or Olympic match.  I’ve never experienced such an overwhelming wave of emotion surging through a stadium like that before.  We saw only a glimpse of the jersey swap at the end before we were caught in the rush of people leaving the stadium – but watching the recaps at home I teared up just the same as I did at the field.

With the jersey exchange and hug between Zak and Mullan, is it case closed? Will Seattle fans continue to hate and boo him?

(Grant) For me the case is closed!  I think that the hug and jersey exchange was so moving. It gave a testament to the power of forgiveness and love for all humans, it is possible to forgive and move on.  I dare anybody not to be touched by that.  You’ll still have some die hard haters of Mullan, but I think this will when lots of people over!

(Tom) Personally – I will applaud Brian Mullan when he walks on our pitch the next time, not boo him.

What was your reaction to Eddie Johnson’s goal, celebration and ensuing yellow card?

(Grant) He really is Heady Johnson. Who gives good head? Heady Johnson!  His jersey coming off… He doesn’t need to put that thing back on.  He is so sexy!  I didn’t like that he placed the jersey on the ground, that didn’t feel respectful but I’ll forgive him.  He was in the moment.  I know that is an automatic yellow card, but let the man show off his goodies.

(Tom) If you get a chance, look for the pictures of Eddie throughout the game. He’s smiling and happy through all his attempts on goal, but the moment he makes it – you see a HUGE surge of confidence in him.  He looks almost scary in those pictures!  So much intensity – and intensity is what the Sounders need right now, especially in their top goal scorer!  I saw the yellow go up immediately and was confused at first, and then realized what had happened.  Initially my only worry was that the card had affected the goal, now I’m a little concerned he’s on the verge of a yellow card suspension, but hopefully Sigi will keep him in check for a bit.

Being acquainted with ‘banned fan’ Teddy Montoya from the Pid Army, how does that situation make you feel as a Supporter?  Did the banning affect your impression of the Rapids as a team, or do you feel like the actions of the front office can be separated from a team?

(Grant) Yes I would call myself a friend of Teddy’s. My partner and I were very moved and upset by the news of his banning.  The front office, the stadium employees, and the team themselves are all three big parts that work together to make a great (or not so great) game day experience.  I am saddened to have a great supporter of that team to be banned, and also to know that there was a secret file on him.  It makes me scared for myself and my fellow supporters. What is in my fan file?  What dirty deeds could I be punished for?  My man lovingly made a banner for Teddy that we held at the match.  He did it in hopes that the Rapids people saw it and understand that the banning of one person doesn’t just affect one fan but it affects the family of the sport.

What grade would you give the Sounders at this point in the season?

(Tom) We’re 3rd place in the west, and we’ve reached that important 30 point mark early.  I think it’s a better standing than our last 9 games would indicate, we were pretty blessed by our early run.  I’m going to give them a solid B.  I think we’re underestimated right now, and I hope we show that we have some teeth against New York this coming weekend.

Have you been following the transfer window rumors and are you concerned about losing any players?

(Grant) I haven’t really been reading too many rumors this season, unless Anton Hysen’s name was in that mix (a gay man can dream!).  When we get the announcement that we have signed a player then I’ll evaluate that then. As for losing some members of the team… I think that we need to work on our defense.  We need depth in the back line right now!  I hear Boca is looking for a team…hint hint!

(Tom) I’m nervous for Alvaro Fernandez.  When we look at players like the rumored German midfielder Tiffert or Spain’s Joan Verdu who would fill the role with power and speed – it’s scary and exciting.  Though something you mentioned could be what ends up saving Fernandez – the bromance between him and Fredy Montero.  If they link up and start finishing, it would bring consistency back to the team and we wouldn’t need to make many moves in the transfer window.

Looking ahead to the rest of the season do you see any particular players standing out for the back half of the season?

(Grant) I expect Cordell Cato to see much more time if not a start.  I think as the weather heats up so will the boots of Fredy Montero and Eddie Johnson.  Mauro Rosales will use this last match as a confidence boost and keep going strong.  Newbies Rose and Caskey – not only are they yummy to look at but I think they are going to be great for the league going forward.

(Tom) I see a 15 goal season in Eddie Johnson’s future, I think he’s really going to come through this season and show everyone what Sigi saw in him.  I want to see the Montero I know is in there – shooting beautiful huge arcing goals that go into the net without even giving the goalkeeper a chance.  I think Osvaldo Alonso can sneak more goals in than anyone expects.

As our two Supporters now know, the Sounders went on to face Chivas USA this week, and came up with the history making win they needed to advance to a fourth straight US Open Cup final.  We hope that the run continues and that when the Sounders face New York Red Bulls this Sunday, that the momentum from these two huge wins lets them bring home to the west 3 more important points.